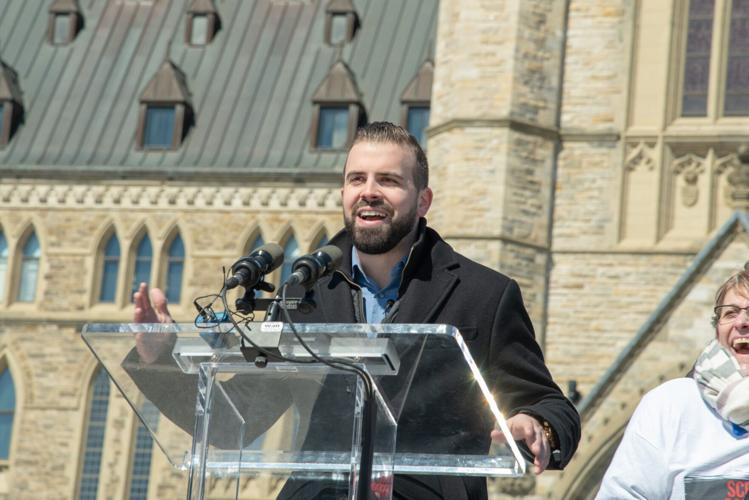 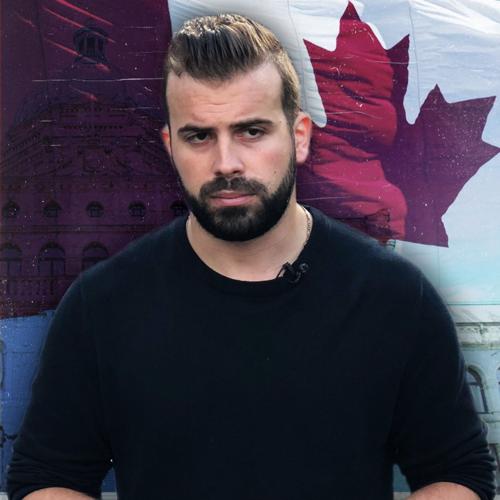 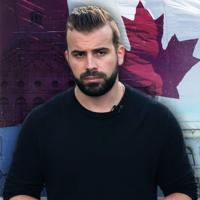 Victoria’s Aaron Gunn had his sights set on the Liberal leadership, and the province’s top job, until the party shunned his application. 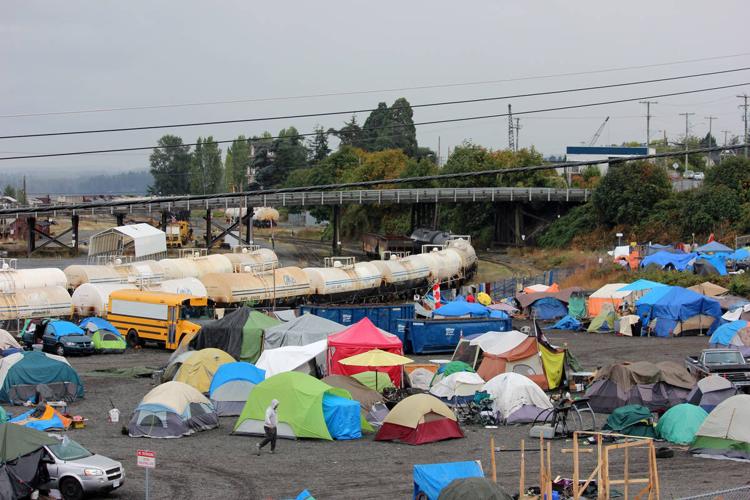 Aaron Gunn said “tent cities” like this one in Nanaimo, must be addressed.

Victoria’s Aaron Gunn had his sights set on the Liberal leadership, and the province’s top job, until the party shunned his application.

Ever wish there was rallying point for conservative British Columbians fed up with the liberal ways of the provincial NDP government?

Aaron Gunn says there is — and he’s it.

Putting an exclamation on the point, the man billed as an independent journalist and advocate for taxpayers and common sense announced July 1 the formation of his official exploratory committee to seek the leadership of the BC Liberal Party.

Held at an “Uncancel Canada Day” Canada Day barbecue amongst a small group of supporters in Victoria, Gunn gave a fiercely Canadian speech and said he was disappointed our country’s history has been hijacked by Canadian’s with a more liberal view.

“And I’m tired, maybe most of all of watching the narrative of this country and its story, it’s foundational stories be dragged through the mud and hijacked by a small group of radical activists and political extremists,” he said, noting his disappointment in the removal of statues — such as John A. MacDonald’s likeness in Victoria, which was removed by that city’s mayor from city hall in the summer of 2018.

“I’m watched it happen, it was a disgrace,” he said.

“Toppling the monument of a man who built this country, united us and delivered on the audacious promise of a national railway … and without whom this country wouldn’t even exist,” is just wrong he said.

Gunn has made no secret of the fact his his eyes are firmly on the province’s biggest political prize: the premiership.

First, though, is the business of winning the Liberal leadership in the fall and gathering the province’s conservatives into a thoughtful, cohesive party, one that has a different name than the Liberal Party.

“I think literally any name would be better than the current B.C. Liberals,” he told the Western Standard.

“This party needs to be rebranded. It needs to be rejuvenated and re-energized and that starts with a genuine need to better reflect the people that comprise it.”

At just 31-years-old, Gunn is already an impressive young man.

Graduating seven years ago from the U of Vic with a Bachelor’s Degree of Commerce, he served Canada during a three-year stint in the Army Reserves, and went straight to work for the Canadian Taxpayer’s Federation where he founded and became executive director of the “Generation Screwed” initiative which battled government debt, among other issues.

It would appear politics is Gunn’s calling, and others believe it, too. His videos have garnered more than 50 million views and tens of thousands of followers, making him one of British Columbia’s most listened to political voices. As an example, his Facebook followers number 20,000 more followers than Premier John Horgan.

His online content — which he writes and produces himself — is funded by ordinary, taxpaying Canadians.

His hit online YouTube series, Politics Explained, has targeted many plump political sparrows, including the Insurance Corporation of British Columbia (ICBC) when it for rocketed rates on BC drivers; Victoria Mayor Lisa Helps for tearing down the statue of Macdonald; Canada’s justice system for its treatment of child murderers; and Prime Minister Justin Trudeau because of “his massive deficits, destructive energy policy and obsession with political correctness.”

If it’s not yet clear, Gunn is unafraid to tackle the prickly subjects of the day and has a genuine concern for the province and the people who reside here.

“I think it’s a focus on taxpayers and a common sense approach to issues,” the Victoria resident told the Western Standard.

“So whether that’s getting the pipelines built that we need, whether it’s some of these tent cities, like in Victoria that have spiraled completely out of control.”

Homelessness is one problem Gunn said he would tackle, should he be in a position to do so.

“I think the first thing is acknowledging what the problem actually is. So I really reject the notion there’s this pandemic of homelessness. I think it’s really a drug problem and mental illness, but those are so interwoven,” he said.

“First of all, the people that are genuinely mentally ill … those people need to be cared for in a hospital — that’s a health condition that needs to be looked after in hospital by professionals.

“Having them out on the street is bad for them. It’s bad for their families, bad for society, but it’s like the politicians have found a lose-lose-lose situation by what they’re doing now. I think they’re basically warehousing homeless people and drug addicts in hotels … using taxpayer money.”

The key, says Gunn, is to get affordability under control.

“Particularly as it pertains to housing, which has left hundreds of thousands of young British Columbians unable to afford homes in the communities they grew up in — communities, in many cases, that have become less safe and less secure, as illegal “tent cities” have terrorized residents and sheltered at-large fugitives on the run from the law,” he said.

“In short, it’s time to give taxpayers the respect that they deserve. We need to stop sending those who work hard, pay their taxes and follow the law to the back of the line — it’s time to put taxpayers first.”

Gunn maintains the issue of illicit drugs must also be re-examined because what’s been tried so far simply hasn’t worked.

“There’s this move to de-stigmatize hard drug use … I think has been a complete disaster,” he said. “So they started this program in 2001, this harm reduction program with all the safe injection sites, all that kind of stuff. Back then, there’s about 150 people overdosing a year in British Columbia — right now there’s over 1700.”

Gunn said he’s disturbed by drug use that has creeped from the shadows of alleys and back lanes onto our streets.

Gunn also has his eyes on northern Vancouver Island, where the salmon farm industry is in danger of being permanently shut by the province. If that happens, millions in tax revenue will be lost, not to mention approximately 1,500 salmon farm workers who’d be sacked.

“My first thing would be to actually follow the science and the facts, not whatever different activist groups are pushing,” said Gunn.

“Everything that I’ve seen and people I’ve talked to said that it’s completely safe, so I support it. Generally in most issues for me, it’s about, you know, more choice, more competition, more freedom for British Colombians and Canadians. I think that’s a winning message.”

“The problem is that (logging and oil companies) get caught in these kinds of political communication battles with these radical left wing groups that make a living out of it. They go from industry to industry and launch a GoFundMe pages,” he said, referring to an online site that allows public fundraising for various business ventures, political or personal causes.

“I think because the activists groups have been so successful in their (anti-fish farming) campaign to change the mind of just everyday British Columbians, I see it again with forestry and the politicians are like weather vanes that just cave to public sentiment, the sentiment of their base specifically.”

If he does pull out a big win, one word you won’t hear from Gunn is “sorry” in an attempt to please the PC crowd.

“I’m not going to go around like some of these “conservatives,” (and) apologize for everything.”

That’s especially true for things he believes to be false.

“They put a motion in the BC legislature saying Canada was founded on white supremacy and is systemically and institutionally racist, blah, blah, blah, all these other things,” Gunn said.

“And I just said that’s not true. Stop slandering your own country.”

Gunn identified several issues he would tackle, should he get BC’s top job.

“If we can put the COVID-19 thing aside for a moment, I’d say the No. 1 issue is the out-of-control cost of living which I think is only going to get worse, whether that’s from ICBC, whether it’s from the carbon tax, whether it’s from property taxes that continue to increase. And, of course, housing affordability. So for me, by far and away, that’s that’s the number one issue facing British Columbia.

Number two on Gunn’s list is developing BC’s resources and getting those resources to market.

“Whether that’s building pipelines, whether it’s developing our natural gas, whether an LNG plant, or whether that’s supporting the province’s forestry industry,” he said.

“And then No.3, I probably would have to say is … the slow but steady deterioration of of a law and order in British Columbia’s biggest cities. In Vancouver and Victoria, where you have these tent cities that are completely illegal, that are allowed to run unencumbered by municipal governments who refuse to enforce the law. It has really affected the lives of everyday citizens who are having to contend with increases in crime and just general degeneracy in their communities.”

The BC Liberal Leadership race will conclude and a new leader will be elected Feb. 5, 2022

Already, five people — Gavin Dew, Kevin Falcon, Michael Lee, Val Litwin and Ellis Ross — have declared their candidacy to become the BC Liberal leader to replace Andrew Wilkinson, who quit in 2020 after the BC provincial election, when the Libs lost 14 seats, but remain the official opposition.

The BC Liberal Caucus elected Shirley Bond as interim leader in November, 2020.

Mike D’Amour is the British Columbia Bureau Chief for the Western Standard. 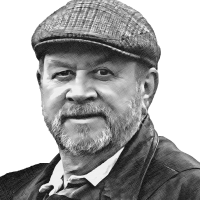 Mike D'Amour is the Copy Editor of the Western Standard based in Victoria, BC. He has worked as an investigative crime reporter at the Calgary Sun, Winnipeg Sun and other media outlets.