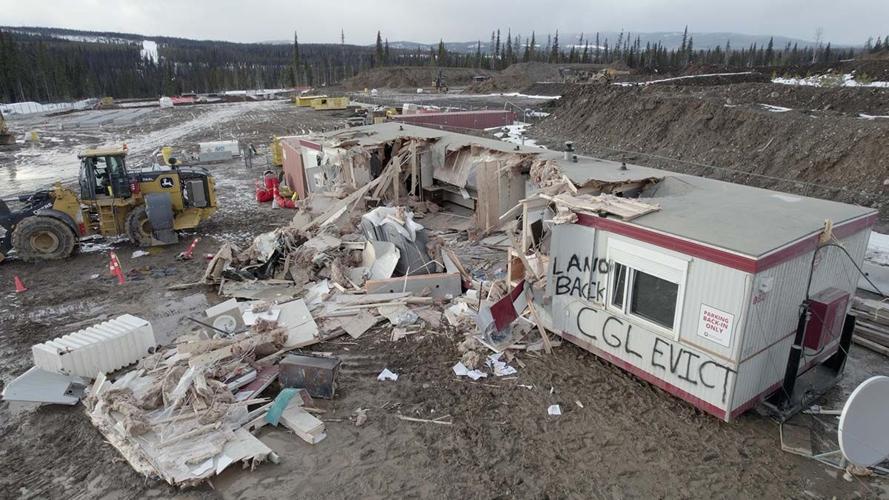 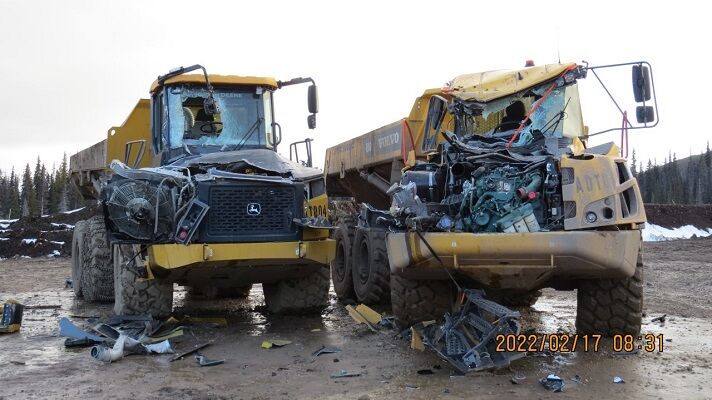 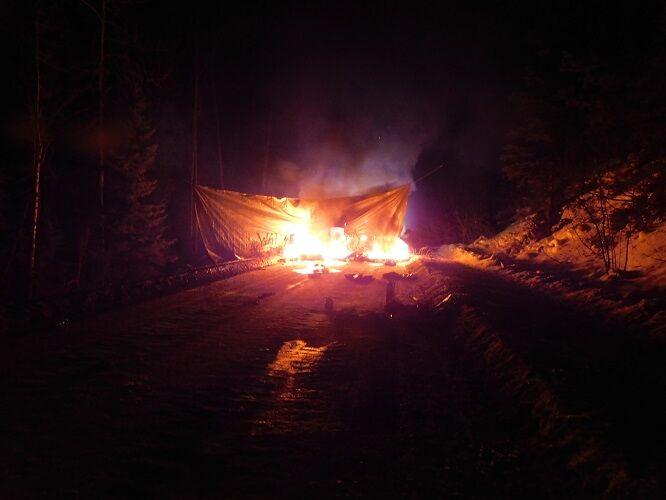 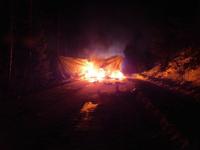 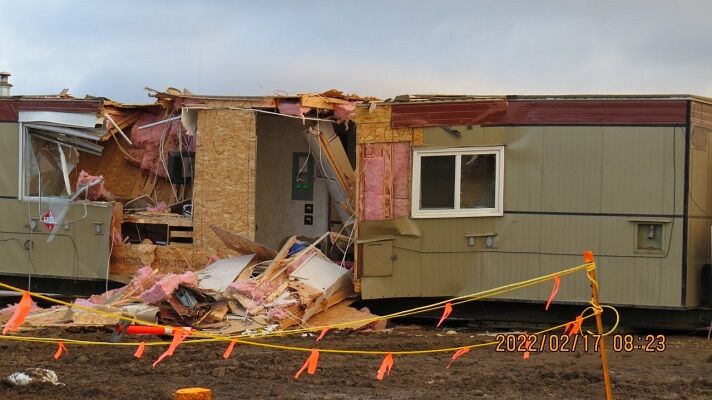 Close to 40 days after the Coastal GasLink (CGL) attack near Houston, BC, resulting in millions of dollars in damage, RCMP has not provided an update on the investigation which it says is “ongoing.”

On February 17, CGL security workers on the Morice River Forest Service Road were rolled on by a masked group of people armed with weapons, including axes, who began setting fires and destroying property. The surveillance cameras had been successfully disabled, however some mobile phone footage was captured.

The incident unfolded just after midnight and RCMP says the group of attackers was roughly 20.

CGL confirms nine workers were attacked, all of whom fled for their lives. None suffered any injuries.

“This coordinated and criminal attack from multiple directions threatened the lives of several workers. In one of the most concerning acts, an attempt was made to set a vehicle on fire while workers were inside,” reads a statement from CGL.

When RCMP officers arrived, they discovered blockages on the road such as downed trees, tar-covered stumps, wire, and boards with spikes protruding. Fires had been lit throughout the debris.

Despite being close enough to officers to hurl smoke bombs and fire-lit sticks, the attackers successfully fled the remote work camp — the only trace of them being a series of makeshift traps, according to RCMP.

Mounties say one officer was injured, although the severity of the reported injury was not disclosed.

The incident dominated public discourse in BC for about a week before fading into the background, and nearly 40 days later RCMP has not said whether or not it has any leads, nor will it say how many officers are assigned to the investigation, however it does confirm “the investigation is active and ongoing.”

“You may not see movement but the duck’s legs could be moving like crazy,” a former senior BC RCMP investigator, who asked to not be named, told the Western Standard.

“Disseminating information to the public is often counter intuitive to the growth of an investigation.”

The former officer said investigators will have identified someone as having a grievance, and police will be closely examining all the different people or groups that have shown support for related, albeit less severe, incidents, both within Canada and abroad.

RCMP chief superintendent Warren Brown told the Prince George Post in February that he has “no idea” who the 20 plus are but he has a “good idea who one or two are.”

Despite opposition, the pipeline is supported by the elected indigenous governments along the route and three weeks ago TC Energy Corporation signed option agreements with indigenous communities for an equity stake in the project.

“The finalization of the option agreement represents a historic milestone in our desire to participate as equity owners in Coastal GasLink,” said Chief Corrina Leween, Cheslatta Carrier Nation.

Disregarding the support of elected indigenous leaders, vicious opposition to the project continues. The reason being that the Wet’suwet’en hereditary chiefs have not provided consent for the pipeline, calling it a toxic project threatening ecologically sensitive waterways, specifically the Wedzin Kwa river.

In November 2021, environmental activist David Suzuki warned of coming attacks against oil and gas infrastructure if “leaders don’t pay attention to what’s going on.” The Western Standard reached out to the David Suzuki Foundation for comment on the February attack, but has not yet received a response.

While the attack has been condemned by many who remain in opposition to the pipeline project, it has been applauded by others.

“While we don’t want to make assumptions about who was responsible we think it’s reasonable to believe this was undertaken by people acting in defence of the land and river,” reads a submission to Montreal Counter-information.

“May others continue this fight, take action against CGL, Canada and on-going colonization where they stand and draw inspiration and courage from this action as we do.”

Anonymous claims of inside knowledge have been made on a variety forums and comment sections of fringe blogs. While there is a high likelihood that said claims are fabricated, the former RCMP investigator says all of these claims will have been gathered and analyzed.

“It’s going to be that one small thing, someone yacking to someone else — whether on social media or in a bar — saying ‘so and so’ was involved. So now we’ve got a name, whether it’s third hand, fourth hand, or fifth hand, where someone says ‘Bill’ was involved in the attack.”

“So now we work our way back and look for anything that involves Bill. All of the sudden, ‘Hey, there’s a Toyota 4Runner with a rust mark on it like Bills seen on a hunter’s trail camera, or perhaps a gas station in town the day prior.”

The small pieces build a larger mosaic which is then used to obtain warrants for gaining access to phone records etc, which RCMP may or may not already have in regards to the February attack.

Encrypted messaging apps such as Signal — which also allows phone calls to be routed through its encryption — are easily utilized, making communication anonymity and protection easy to achieve, irrespective of police warrants. However, while these practices can shield an individual or group’s communication from prying eyes, it does not protect them from having their actual phone location monitored.

“Say we have Bill’s number in the cellphone records for the area one day prior, and then the day the incident occurs, it is off for an entire day, and then the following day it turns on again. Why was it off for a day?” he said, adding that this can be used as circumstantial evidence down the road and that RCMP doesn’t need access to actual phone calls and messages to build a case.

Due to the remote camp’s surveillance cameras and lighting systems being disabled, along with all individuals successfully evading arrest, some believe the attackers were masterfully coordinated, likely having inside knowledge of the site. The former senior officer says this may not be the case.

“The average kid knows that there’s cameras everywhere, and disabling the system isn’t going to be as difficult as some might think,” he said.

The camp is roughly 60 km from Houston, BC and is only accessible by vehicle from the service road. Many forest paths intertwine among the surrounding, dense landscape, making escape easy. Moreover, it is no secret that the closest RCMP helicopter was stationed in Prince George, BC, and Houston, BC’s RCMP detachment being small, with only a handful of officers, K9 support is not readily available.

The lack of local police resources at the time combined with environmental factors and competent digital and social practices exercised by the attackers makes for a seemingly unforgiving investigation. Yet the former officer maintains his belief that too many people are involved for some information not to come out at some point.

“At this time there are no new updates to the information that has been previously released,” RCMP said Wednesday.

Reid Small is a BC-based reporter for the Western Standard

Reid Small is a BC Reporter for the Western Standard and West Coast Standard based in the Vancouver Bureau. He has worked as a freelance photojournalist and in independent media.